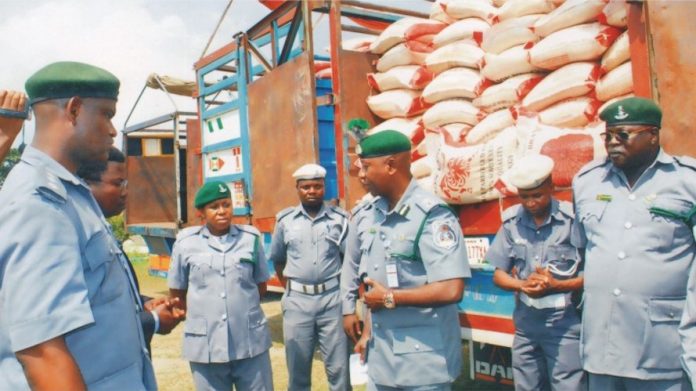 In the bid to make more money for themselves and avoid detection, Customs officers posted to Nigeria-Benin Republic routes have devised ingenious ways of collecting bribes from smugglers, investigations have shown.

The investigations cover the two main routes leading to Idi Iroko in Ogun State and Seme in Lagos State.

They now use cards of different colours to cover the three main banned items being smuggled across the borders.

Red is for groundnut oil, blue for rice and yellow for frozen turkey and chickens.

“How it works is that there are leaders of the various groups of people bringing in these items, and the people focus mainly on what they are bringing in. People who don’t want trouble for themselves will meet the leaders of their group and inform them that they are going to bring in those items on a particular day.

” The leaders will collect the money to bribe Customs people from them. For instance, a bag of rice is brought to Sango-Ota for N1000. Since people know the selling price of these items, they have idea how much their money can buy. The group leaders will give them the appropriate card. When they get to the last post, while going to Benin Republic, the Customs people will collect the cards and details of their movement and let them pass.

“When they are coming back, the people will be telling the Customs officers the information they exchanged while going and they will let them go. It is the group leaders that settle the Customs people on behalf of their members. In that case, money would not be exchanged in the public,” he said.

He added that another method is Customs officers making use of civilians residing in nearby communities where they are stationed to collect bribes on their behalf.

“They also make use of some people who claim to be local government officials. That is why you see some people in mufti holding logs strewn with nails not too far from some Customs checkpoints,” he added.

Our correspondent observed that though there are too many checkpoints on the routes, the banned items still flood the markets, negating the presence of different kinds of agencies on the roads.

For instance, from Sango-Ota, communities along the border route such as Owode, Oke-Odan, Ilashe and Idi-Iroko, have no fewer than 50 various checkpoints.