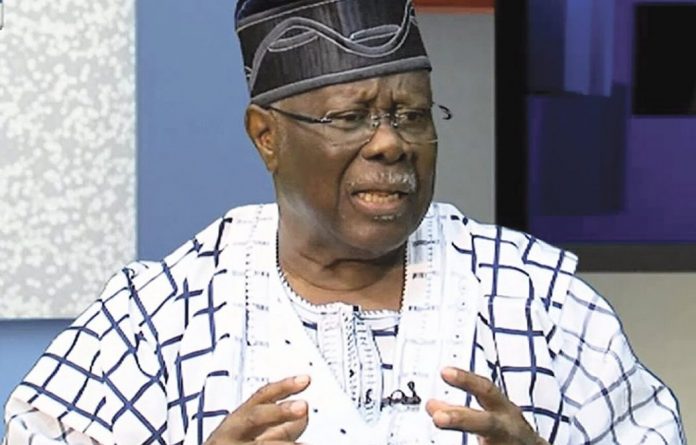 A Chieftain of the PDP, Chief Olabode George, on Saturday advised the Minister of Power, Works & Housing, Mr Babatunde Fashola, to leave the issue of who becomes President in 2023 and focus on improving infrastructure in the country.

George, a one-time Military Administrator of Ondo State, gave the advice while speaking to newsmen in Lagos.

The News Agency of Nigeria (NAN) reports that George was reacting to a statement made by Fashola on Thursday in Ibadan that a vote for President Muhammadu Buhari by the South West would guarantee the zone the Presidency in 2023.

“Do you know that power is rotating to the South West after the completion of Buhari’s tenure if you vote for him?

“A vote for Buhari in 2019 means a return of power to the South West in 2023. I am sure you will vote wisely, ‘’ Fashola had said at a town hall meeting on infrastructure.

George said that roads in the country were begging for attention and that Fashola should fix those roads urgently rather than postulating about 2023.

He noted that the two major roads leading to the Lagos ports were in a deplorable state and urged the minister to focus on fixing those roads in view of their importance to the economy.

“Fashola is the Minister of Works. Look at the key major roads from the ports, they are in deplorable state and these roads are the gateway to the nation’s economy.

“It costs a container to be moved from Apapa ports to Tin- Can to Ikeja N1million. Just one container and that is what it will cost the same container from Shanghai in China to Lagos.

“So the minister needs to fix those roads now instead of postulating about 2023.These roads have not been maintained for years.

“If goods cannot come out fast from the ports, it will affect those who are buying and selling and if things cannot go into the ports for export, how would people make money.

“Fashola should be concerned about fixing these roads before May 2019 because he would come back someday to give account to the people,’’ he said.

On June 17, 2017, the minister signed a N4.34 billion Memorandum of Understanding (MoU) with AG Dangote Construction Company Lt and some other stakeholders for the reconstruction of the four-kilometre Apapa-Wharf Road.

The project, with a completion period of one year, is funded by AG Dangote Construction Company Ltd., the Nigerian Ports Authority (NPA) and Flour Mills of Nigeria.