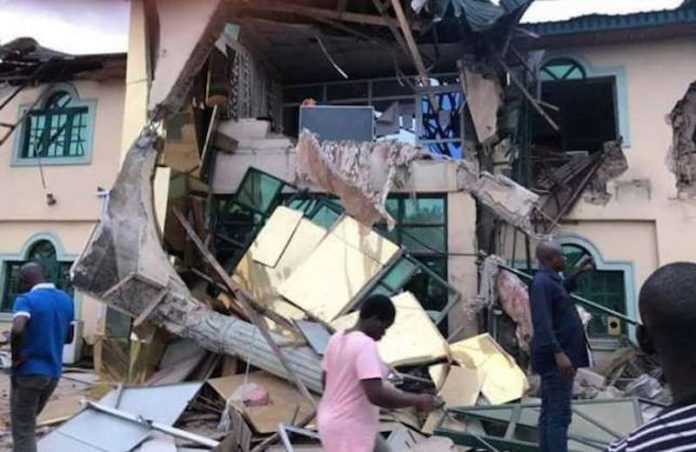 The National Broadcasting Commission (NBC) has condemned the demolition of the structure housing the Fresh FM in Ibadan by the Oyo State Government.

The Director-General of NBC, Ishaq Midibbo-Kawu, who spoke to the News Agency of Nigeria (NAN) in Ilorin, said the demolition was a worrisome development and did not speak well of the state government.

The structure, “Music House, ” reportedly valued at N800 million and which had been in operation for 10 years, was demolished in the early hours of Sunday.

The property is owned by a popular musician, Yinka Ayefele.

Kawu said: “The development is worrisome because for all it is worth, the broadcast outfits are playing a big role in reducing unemployment, especially in this situation where many young Nigerians are idle.

“They also play social, informational, educational and entertaining roles in the society.

“Such development does not speak well of the government and has a negative effect on the nation, especially at a point when more broadcasting outfits are influencing the social space in the country.

“In this case particularly, there are so many issues that can be weaved up negatively by people.

“We hope that as we move forward, we will be able to find a solution to the situation,” Modibbo-Kawu said.

The director-general said when the NBC got hint of the demolition, he made some contacts with some people in the state.

Kawu said that he could, however, not stop it.

The NBC boss promised to set up a meeting with the state government on finding a way forward on the issue.

The NBC boss recalled a similar experience in Nasarawa State about a year ago when the property housing Breeze 99.9 FM was demolished.

“What we did was to meet our licensee to find out what the issues were because he was prepared to go to court.

“We also met with the state Commissioner for Information and the Governor.

“The issue also was that the building violated the usage of urban space.

“We were able to reach an agreement that the government should give the broadcaster a new plot of land and assist him to go back to building a new station.

“However, just last week, I got a letter that the side of the government in the agreement had not been fulfilled,” he said.

Modibbo-Kawu also clarified the recent media report that his commission banned some songs, saying Nigerians must understand the statutory mandate of the NBC.

“It is important to let Nigerians understand that NBC does not ban any song.

“I read on social media platforms all the time that NBC banned a song; the commission never bans any song.

“What NBC does all the time is to remind our licensees that there are certain categorisation of music that are important in broadcasting.

“If a song is categorised, “Not To Be Broadcast” (NTBB) because of the lyrics of the song, then, we will remind the broadcasters that they cannot be broadcast.

“This is what it is misinterpreted in the social media that we banned the song,” he said

The director general also refuted the allegation that NBC was “carrying out a Jihad on Nigerian songs” based on a petition by a faith-based human rights organisation, Muslim Rights Concern (MURIC).

He stressed that the NBC did not carry out any Jihad, but only responded to a song on a radio station because it had lyrics that were NTBB.

Kawu gave an assurance that the Federal Government, through the NBC, would not infringe on artistic liberty or licence.

He, however, reminded artistes and broadcast organisations of their responsibilities to Nigerians and the youths, in particular.

“Last week, I issued a press release to urge Nigerian artistes to have different versions of their songs.

“They should do a version that can be used for public broadcast space and another version for club usage which can carry all kinds of lyrics that they want.

“If they want their songs to be broadcast on radio and television in Nigeria, these songs must conform to rules and must be songs that young people can listen to,” he said.

He disclosed that the commission was planning a national dialogue with Nigeria leading artistes on the need to avoid vulgar lyrics and hate speeches in their songs.

“If you go on Youtube, Olamide song, “Wo” has over 10 million hits.

“ That tells you the kind of influence these young artistes have on all our children in the country.

“They should help to orientate the young people on the right values.

“If their songs celebrate sex, violence, the use of drugs, alcohol and fraud, then they are not helping in the moulding of young people

“We believe that the young generation who listen to them can be guided through the use of their artistic works to play functional social purposes in the society,” he said.

He said the dialogue would focus on the need for the artistes to use their music to propagate positive messages about development.