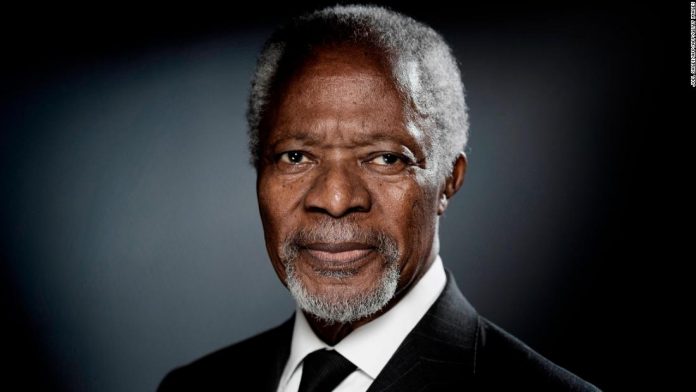 The flag of Ghana at the High Commission in Abuja on Monday was flown at half-mast in commiseration of the death of former UN Secretary-General, Kofi Annan.

Kofi Annan died in hospital in Bern, Switzerland, in the early hours of Saturday.

An official of the Commission who pleaded anonymity told the News Agency of Nigeria (NAN) that the flag had since Saturday, been flown at half-mast in Abuja.

According to her, a condolence register will be officially open any moment from now, to allow people wanting to pay tribute to the former UN Scribe, to do so.

NAN reports that Annan was Secretary-General during what has been described as one of the darkest days in the UN history: the Aug. 19, 2003 bombing of the UN premises in Baghdad, Iraq.

He was the first to emerge from the ranks of UN staff and the second to come from the African continent, after his predecessor, Egyptian diplomat Boutrous Boutrous-Ghali.

Before taking the reins of the UN, he held various senior level positions at the headquarters and in the field, and at one point he was Zeid’s immediate boss.