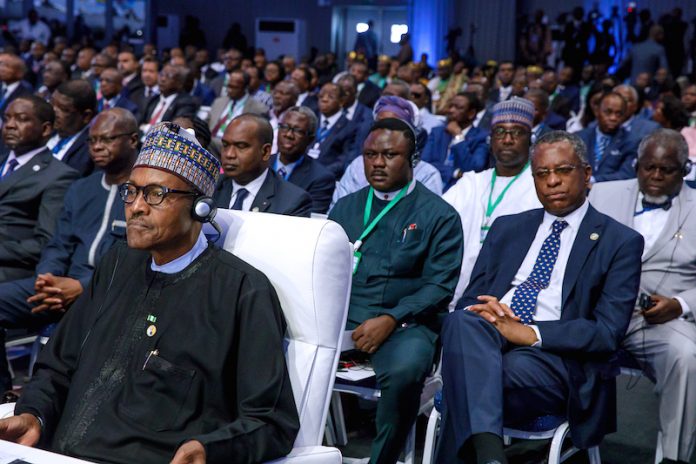 President Muhammadu Buhari Monday in Lome made a strong appeal for inter-regional collaboration on maritime security, the fight against terrorism and other crimes through effective border control.

“Respect for rule of law, democracy and promotion of human rights are also vital as they are attributes of good governance, which would enhance the socio-economic development of the two regions,” he added.

According to the Nigerian leader, “It is also noteworthy to state that the subsisting collaboration among Nigeria, Chad, Cameroun, Niger and Benin in the fight against transnational crimes and proliferation of small arms and light weapons is exemplary.”

President Buhari noted that “Nigeria’s collaboration with the Lake Chad Basin Commission (LCBC), which is mandated to protect our environment, is existential because of the imperative to preserve the Lake Chad.”

The President said the Lake which had shrunk by 90 per cent, “has directly led to the economic hardship in the region, which has in turn created the enabling environment for the radicalization of the youth.”

He, therefore, called for greater focus on the refilling of the Lake Chad “as a long-term solution to one of the root causes of this existential threat.”

Noting that the Joint Summit was long overdue given the shared history and cultural ties of the two sub-regions and the common challenges facing them, President Buhari said:

“Nigeria shares boundaries with two important ECCAS Members; Cameroun and Chad, with whom we share the same security threats, especially terrorism, illicit trafficking of small arms and light weapons, human and drug trafficking, smuggling among others. Therefore, collaboration between our two sub-regions has become inevitable at this time to enable us effectively confront the existing challenges.”

He said such proximity informed his engagement with the neighbouring countries as soon as he came to power in 2015, leading to the formation of “a common front to combating Boko Haram insurgency” through the Multi-national Joint Task Force (MNJTF) by the countries of the Lake Chad Basin Commission (Cameroun, Chad, Niger, Nigeria and Benin).

as the Anti-Corruption Year under the theme, “Winning the Fight against Corruption: the Sustainable Path to Africa’s Transformation,” and his choice as Champion of the theme for the year, President Buhari called on them to “join hands in this campaign against corruption, as one of the root causes of conflict and other societal ills.”

Commending the efforts of the Chairpersons of ECCAS and ECOWAS for bringing together leaders of the two groupings to deliberate on important issues that required urgent attention, the President pledged that:

“Nigeria will continue to support any effort directed towards peace building, security and stability, as well as the fight against terrorism and violent extremism in our two sub-regions and the world at large as an active member of the Global Counter Terrorism Forum (GCTF).”

During the opening session, the ECOWAS Chairman and President of Togo, Faure Gnassingbe; the Special Representative of the UN Secretary General, Mohamed Ibn Chambas; the Chairman of the African Union Commission, Mousa Faki Mahamat; and the ECCAS Chairman and President of Gabon, Ali Bongo Ondimba, had underscored the imperative for collaboration to overcome regional security challenges.

In the final communiqué, the 26-member joint organisation strongly condemned all kinds of illicit activities and trafficking by terrorist and mercenary groups operating in the Sahel and some ECOWAS and ECCAS Member States.

The Joint Summit also expressed serious concern about upsurge in and spread of violent conflicts among herders and farmers due particularly to the adverse effects of climate change.

The Heads of State and Government therefore instructed “the Ministers responsible for agriculture, livestock and security of the two regions, to hold regular consultations, with the participation of herder and farmer organisations, in order to identify measures for the preservation and peaceful management of these conflicts.”