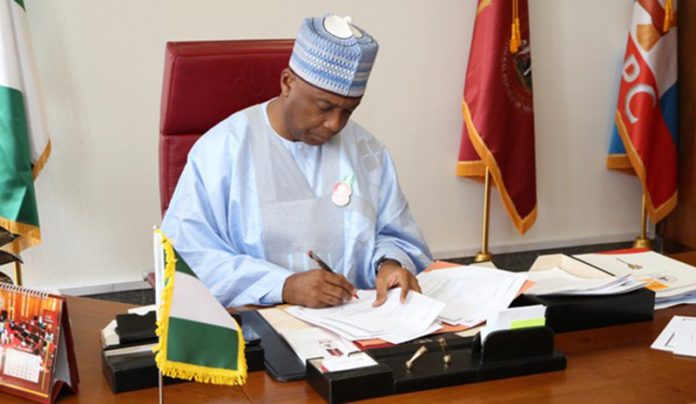 Former Vice President Atiku Abubakar, has hailed the Senate President, Dr Bukola Saraki and Gov. Ifeanyi Ugwuanyi on their victories at the Supreme Court on Friday.

Abubakar in a statement issued by his media office on Friday, in Abuja, said the judgments had further affirmed the judiciary as last hope for the citizens.

He commended the Supreme Court jurists for the unanimity in their judgment, saying that the development had further affirmed that the judiciary was the real bastion of equity and good governance in any society.

“I believe this judgment has given hope to Nigerians, that the judiciary will always be fair and firm on issues relating to individuals seeking redress in law courts.
“I am a firm believer in the rule of law and I will never forget the role the judiciary played in emboldening me to continue with my efforts to provide good and quality leadership for Nigeria and Nigerians.

“The multiple suits on corruption which I won in my days of trial as Vice President will never be forgotten in a hurry. It was an independent, firm and fair judiciary that made it all possible,’’ Abubakar said.

The former Vice President praised the Judiciary for standing up to the truth and not leaving justice to the whims and caprices of those in power.

He maintained that by its courageous and principled stance, the judiciary had further enhanced it place, role and relevance in consolidating the nation’s democracy.

Abubakar however, said the victory was not only for Saraki but for the entire Senate.

“The victory is for the entire National Assembly which has been facing challenges of legitimacy and intimidation arising from a not too cordial relationship with the executive arm of government,’’ he said.

In the case of Gov. Ugwuanyi, he said the Court’s affirmation of the legitimacy of his election, had shown that he was indeed the true choice of the people of Enugu state.

Abubakar noted that although the case lasted in the courts, the governor was not distracted but continued to passionately execute people-oriented projects in the state which according to him had significantly improved the lives of the people.

Abubakar urged Ugwuanyi to continue on the tradition of excellence for the good of the people of the state, and for the PDP, in whom the people had for many years invested their political future.

He also urged both Saraki and Ugwuanyi to continue to serve the people of Nigeria honestly, as they had been doing in their various capacities.