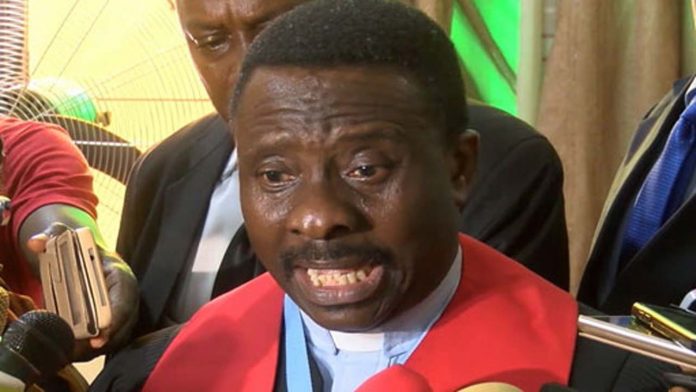 The President Christian Association of Nigeria (CAN) Rev. Samson Ayokunle, has expressed disappointment and shocked at the spate of killings that was unleashed on three local government areas of Plateau by herdsmen.

The CAN president expressed his disappointment in a statement signed by Pastor Adebayo Oladeji, Special Assistant, & Communication to the CAN president, on Monday in Abuja.
Ayokunle noted that the affected communities were yet to come out with the exact figure of the death toll.

He said that the leadership of CAN were alarmed that no fewer than 86 lives, as confirmed by the police, have been lost, including defenceless women and children.

“We are sad that despite assurances and promises by President Muhammadu Buhari that his government is committed to safety of lives and property, these coordinated and premeditated attacks on Plateau towns were not only horrendous but also unprecedented.

“CAN is at a loss how scores of people can be killed without any form of resistance by soldiers deployed to contain the security challenge.

“How could dare devil criminals assault communities without resistance by security agencies to stop these killings. Are these herdsmen in bed with soldiers to unleash mayhem on these peaceful communities,” he said.

He said that CAN questioned the relevance of the intelligence gathering by the Department of State Services (DSS), and other security agencies, if communities could be attacked and hundreds slaughtered without security organisations providing rescue efforts.

The president said it has become obvious that the Nigeria’s security system has been compromised, saying from all indications, the attacks on Plateau state had shown that the Federal Government needs to review its security machinery in a bid to make it effective.

He said considering the level of human carnage of these attacks, the leadership of CAN urged the government not to rest on its oars until these criminals were brought to book as promised.

Ayokunle said CAN and relations of victims of these attacks need more than assurances and promises of tracking down these criminals by the President.

He said much as these assurances were needed; they have become irrelevant in the face of incessant attacks that have claimed the lives of thousands of Christians.

“Against the backdrop of the wave of attacks on innocent citizens, CAN has come to the conclusion that the Federal Government has been overwhelmed by the current security challenges.

“We once again call on the United Nations, Commonwealth of Nations and the African Union, among others, to assist the Nigerian government to protect us against these criminals, ” he said.

The president recalled a media reports of a secret ongoing recruitment of former members of Boko Haram into some military and paramilitary formations by the Federal Government.

He said the leadership of CAN is concerned over the security implications of such recruitment that pose security threat to the nation if the report turns out to be true.

“In authenticating the veracity of the report, CAN had called the attention of the Federal Government to the disturbing media report and sought responses from Nigeria Army, Nigeria Police, with other relevant security organisations, to either deny or confirm the report.

“Sadly, after two weeks of CAN’s request on relevant security organisations to speak on the matter, we are shocked that silence has been the answer.

“While we insist that silence, on this matter, can never be golden, we call on the Nigerian Army and other relevant security organisations alleged to have been involved in the recruitment of the former members of the militant Islamic sect to speak out,” he said.

Ayokunle said CAN would continue to pray for the peace of the nation, CAN, however, constrained to call on the Federal Government to respond to their fears over the alleged recruitment of former members of Boko Haram into the nation’s military and paramilitary formations.

“CAN is particularly worried with report that the Federal Government allegedly recruited former members of Boko Haram group into security agencies.

“If the report is true, we are at a loss on how the former terrorists could be so trusted with the protection of people they once killed with reckless abandon.

“Unlike the administration of the late President Umaru Yar’Adua that offered amnesty to former members of Niger Delta militants, none of them was recruited into any of the nation’s security agencies,” he stressed.

He, however, said CAN commended the Federal Government in embarking on the de-radicalisation programme for the former Boko Haram fighters.

The CAN president advised that they should not be recruited into any of the nation’s military and paramilitary organisations.

NAN recalls that no fewer than 120 persons were killed in several villages in Barkin Ladi, Mangu and Riyom Local Government Areas of Plateau in fresh attacks by gunmen suspected to be herdsmen, while over 200 others sustained gunshot injuries.