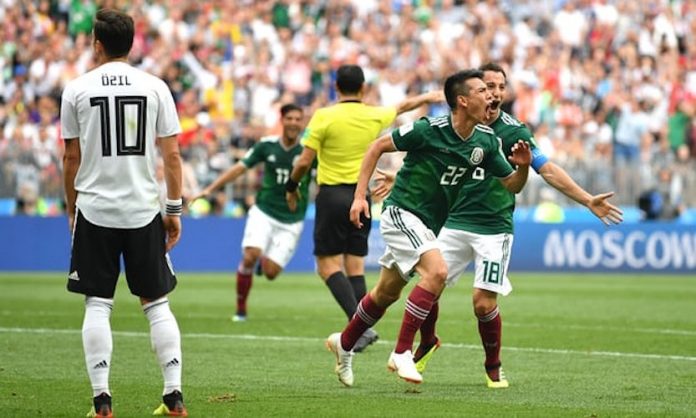 Has there been a more wild, bizarrely open start to a defence of a World Cup title than this? Germany ended a 1-0 defeat by Mexico in Moscow with six attacking players on the pitch and only three defenders and with Manuel Neuer wandering around helplessly upfield.

At the Luzhniki Stadium Jogi Löw’s team were ambushed initially, the world champions run into a state of breathless trauma in the opening 40 minutes by a thrillingly vibrant Mexico attack.

With a quartet of forward-facing payers on the pitch at the start Löw’s team had left huge open spaces at the back of its midfield, into which Mexico’s three-man attack poured like a green-shirted piranha swarm.

This was a champion team out of kilter, stung by what was arguably an act of disrespect to Mexico, a failure to appreciate their threat at the start, and never quite able to regain its balance.

On a steamy, draining Moscow summer’s afternoon the Luzhniki was once again packed out. It is a vast space, with a roof that almost closes in on itself capturing the air inside like a superheated bubble, filled here with the boom of Nationalmannschaft-song and the crackle of Mexico’s vast green-shirted support. Moscow has been crammed with sombreros since Tuesday, another arm of the vast south and central American presence at the eastern edge of Europe.

There were obvious structural problems from the opening exchanges. With Jonas Hector ruled out, Marvin Plattenhardt, of Hertha Berlin, had come in to play at left-back. Otherwise this was Germany to the max, Germany +1, with Mesut Özil included despite some whispered talk to the contrary, and the old familiar champion faces all over the pitch.

Mexico are a powerful tournament team, so often arriving at these finals with a compelling energy about them, natural-possession footballers, and with a winning mania for the green shirt.

Here they began like a train, with Hirving Lozano fed into a sudden pocket of space in the Germany area by a nice little pass from Carlos Vela in the opening moments, only for Jérôme Boateng to make a saving tackle.

With 14 minutes gone Héctor Moreno might have scored, glancing a header too close to Neuer from a free-kick and cursing himself for not sticking it into the corner. Moments later Carlos Salcedo put the ball just past his own post from a horribly dangerous Kimmich cross.

What a game this was in those early minutes. Germany had looked agreeably fluid, with a fine natural width. But they also looked like a champion team with midfield that was short-handed heading back toward its own goal. The sense of adventure left them open to Mexico’s relentlessly challenging movement as Vela, Javier Hernández and Lozano switched positions with a malevolent sense of purpose, haring off down the sides of Germany’s centre-backs.

Three times the Mexican gegenpress drew a flurry of scampering counterattack, green shirts whirring in on goal only to be foiled by a scudding last-ditch tackle or a last pass just awry. Germany were there for the taking, cut open with extraordinary relish by the Mexican attack.

In the event Germany lacked a proper midfield bolt, with Toni Kroos and Khedira huffing around in pursuit of the whizzing green machine. The centre-backs looked flustered, left to deal with three on two as Mexico broke. Löw’s 4-2-3-1 seemed antiquated and creaky, with the old World Cup shark Thomas Müller flat-footed in a wide position.

The breakthrough was coming. It duly arrived after 35 minutes, an absolute beauty of a team goal scored by Lozano. First Khedira was robbed deep in the Mexico half. Hernández sniped away from Boateng and Mats Hummels. A couple of skimming passes across the wide open spaces of the Germany defence left Hernández with a simple nudge to Lozano in the area. With the stadium howling for him to shoot he cut inside and buried the ball with his right foot. Every World Cup brings goals and moments that feel like they’ve been seared into the memory. This was another for the hard drive, as the Luzhniki exploded with deep green joy, necks already craned for a first replay of that wonderful driving move.

Moments later Kroos drew a fine save from Guilermo Ochoa, powering in a dipping free-kick that was tipped at full extension on to the bar. And as half time arrived Mexico left the pitch to huge, rolling cheers, Germany with a look of puzzlement.

Löw might have changed his team before the goal, so obvious was the overload on that two-man midfield with four forward players on the pitch. Certainly Özil had done not just nothing in the first half, but less than nothing, sub-zero, offering simply an absence, a Mesut-shaped hole.

Germany regeared for the second half, same shape, more control. Mexico had lost their adrenal vim. And before long the game had turned on its head, with Germany able to keep the ball, Kroos hitting his range, and Mexico less adept at seizing possession, unable to spring forward with such gusto.

Vela came off, exhausted. Marco Reus came on for Khedira, with Özil dropping deep for a while into central midfield, driving forward like a featherweight Roy Keane. Reus shot over. Werner produced a snap-volley from close range that flew into the crowd. On the bench Löw frowned and brooded and fidgeted.

With 73 minutes gone Rafael Márquez came on to add ballast at the back, appearing in his fifth World Cup aged 39 and with his drug kingpin-related issues on hold for now. And so Mexico just sat deep with a thin green line of five defenders ranged across their own penalty area. In front of them Germany huffed and switched angles and went wide, slinging in crosses, and finally sending on Der Targetman, Mario Gomez, for the last 11 minutes. To no avail. Mexico held on for a sensational win against the defending champions.