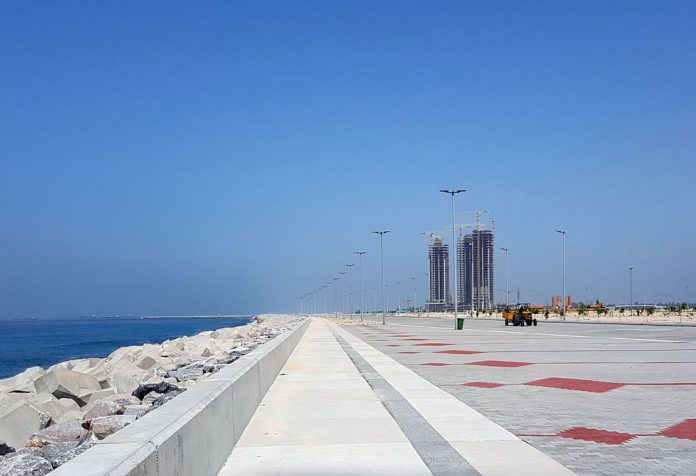 A high-end seaside development in Nigeria’s megacity of Lagos could be fully operational in the next five years as the West African nation’s economy rebounds from its worst contraction in more than two decades, according to the project’s promoter.

Eko Atlantic City is being built on a planned 10 square-kilometer (3.8 square-mile) stretch of land that’s being reclaimed from the Atlantic Ocean, Ronald Chagoury, chairman of South Energyx Nigeria Ltd., said in a May 23 interview in the commercial hub. When the final project is complete, as many as 250,000 people are expected to live in the development, where a three-bedroom apartment could cost almost $1 million, according to online property listings.

“We still need two years for the sea wall, one year after that for the sand-filling and another year to 18 months for the infrastructure, so say another five years to be fully operational with infrastructure,” with the first half already complete, said 69-year-old Chagoury, whose company is in charge of the basic infrastructure such as roads. Developers will erect most buildings, and the wider project could take up to 35 years, he said. The sea wall will be 8.5 kilometers (5.3 miles) long once completed.

Construction slowed after a fall in oil prices in mid-2014 caused the economy of Nigeria, Africa’s top crude producer, to contract. Today, Eko Atlantic, where so far 6.5 square kilometers have been reclaimed, is traversed by roads and has three completed and occupied buildings — two residential and one for businesses — and work has started on another 13.

“Over the last six months, we’ve seen an improvement in the economy,” the Lebanese-Nigerian businessman said. “We’re seeing the end of the tunnel.”

While economic growth slowed to 1.95 percent in the first three months of the year, Nigeria’s gross domestic product has expanded for four straight quarters. The International Monetary Fund forecasts growth will accelerate to 2.1 percent this year from 0.8 percent in 2017, as oil output remains stable and prices rebound, providing more foreign currency for manufacturers to import inputs.

Once completed, Eko Atlantic City will have high-speed fiber internet, 24-hour power in a country with frequent outages, restaurants and shops along its Eko Boulevard, which is modeled after Paris’ Champs Elysees. It also hopes to attract the corporate headquarters of top companies in Nigeria and West Africa.

Nigerian oil magnate Folorunso Alakija said in a 2015 interview with Bloomberg that she was investing there, and the U.S. consulate told CNN in August 2016 it was considering a property.

The consulate didn’t answer an email or return a call seeking comment, and Chagoury declined to speak about his clients. He also declined to say how much money had been invested in the project and how many plots had been sold.

Lagos’s high-end property market, which has typically been dominated by politicians, has also suffered from a crackdown on corruption since President Muhammadu Buhari was elected three years ago, said Afrinvest Securities Ltd. Managing Director Ayodeji Ebo.

“People can’t just bring out their money anyhow,” he said by phone from Lagos. “Occupancy rates have been very low.”

While the project won praise by former U.S. President Bill Clinton who visited the site in 2013, the need for more luxury or even upper-middle-class housing has been questioned in a city of 20 million inhabitants who mostly earn a modest income. CNN has reported that the Clinton Foundation received donations from the Chagoury family.

In the high-value areas of Victoria Island, Ikoyi and Banana Island, vacancy rates run between 20 to 30 percent, according to Jonathan Millard, director at Troloppe Property Services.

“And then there are all these buildings that are currently empty,” he said by phone.

With an income per capita of $7,000, according to Lagos-based advisory group Financial Derivatives, the average city resident won’t be able to live there now. But an estimated 6.5 percent annual growth rate in the urban area’s economy between 2015 and 2030 means the number of households earning $70,000 annually could double to about 120,000 by 2030, according to PwC.

With land and property priced in dollars, Eko Atlantic has missed out on buyers affected by a more-than-halving of the value of the naira against the greenback since mid-2014. So South Energyx is seeking to attract some of the estimated 15 to 18 million Nigerians who live abroad and have access to cheaper loans and foreign-currency earnings.

Less than one in 20 of houses in Nigeria are financed by property loans, according to the Mortgage Banking Association of Nigeria.

Chagoury and his older brother Gilbert founded the Chagoury Group conglomerate in the 1970s with a range of interests including flour mills, water bottling, insurance, furniture manufacturing, telecommunications and hospitality, according to the group’s website. They own Lagos’ sprawling 825-room Eko Hotel.

Now Ronald Chagoury’s primary focus is finishing Eko Atlantic. He remains confident the demand will pick up again, 12 years after the signing of a 78-year concession agreement with Lagos state to get the project started.

“Lagos’s population is growing to 25 million,” he said. “If 2 percent can afford it, or 5 percent, that will be enough.”