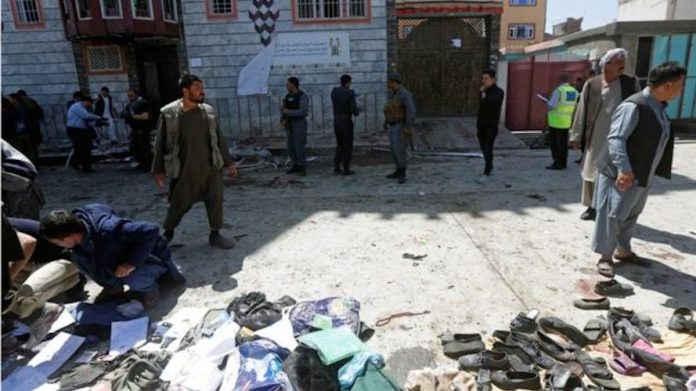 A suicide attack at a voter registration centre in the Afghan capital Kabul has killed at least 31 people, officials say.

More than 50 others were injured in the blast which hit a crowd waiting at the entrance to the building.

The Islamic State group (IS) has claimed via its Amaq news agency that it carried out the attack.

Voter registration began this month for legislative elections which are due to take place in October.

The Amaq report said that a suicide bomber wearing an explosive belt targeted the centre, which is in the Dashte Barchi area of western Kabul.

Images from the scene show blood-stained documents and photographs on the floor.

Abandoned shoes and broken glass litter the area and nearby vehicles are riddled with holes.

Eyewitness Bashir Ahmad said many of the victims were women with children who were there to get their identity cards and register for the elections.

There have already been at least four attacks on such centres since voter registration got under way a week ago.

Sunday’s attack was Kabul’s deadliest since at least 100 people were killed in a district full of government buildings and embassies in January.

Afghanistan’s interior minister told the BBC earlier this year that both the Taliban and IS were targeting civilians to provoke people against the government and create chaos.

The legislative elections later this year will be followed by a presidential poll in 2019.

BBC research earlier this year found that the Afghan government has full control over just 30% of the country, with the rest of the country under significant threat from the Taliban, and, to a lesser extent, IS.

IS is fighting both Afghan military forces and the Taliban for control.

23 March: A car bomb in Helmand province kills at least 13 spectators at a wrestling match

21 March: A suspected IS suicide bomb attack near a shrine in Kabul kills at least 31 people celebrating Persian New Year

10 March: A Taliban attack in the western province of Farah kills 24 soldiers