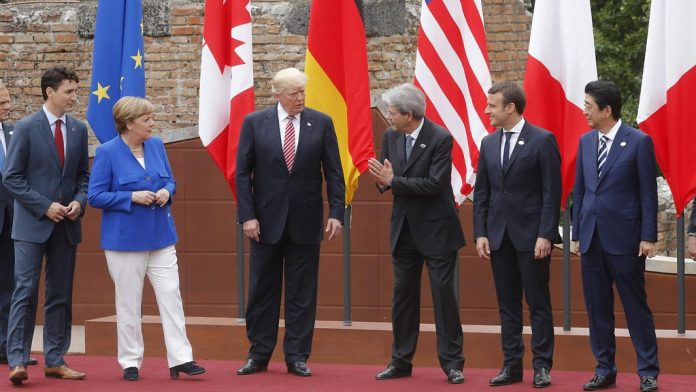 The European Union, France, the United Kingdom and Germany lead the G7 in keeping the promises they made at the 2017 Taormina Summit in May 2017, according to the G7 Research Group¹s interim compliance report. Their scores were at or above the 72% average. The report covers actions taken by G7 members between May 28, 2017, and January 31, 2018.

The EU¹s score is 97%, followed by France and the United Kingdom at 75% and Germany ‹ along with Canada, which is hosting this year¹s G7 summit in June in Charlevoix, Quebec ‹ at 72%. Italy, which held the 2017 presidency, received a score of 66%.

The United States came in with the lowest score at 57%. This is the same score it received in the final compliance reports on the commitments made at the Ise-Shima Summit in 2016, despite a promising 82% on the interim report.

The G7 Research Group releases two compliance reports between summits. The interim compliance report covers the first half of the period immediately following a summit, usually soon after the presidency shifts from one country to the next. The final report is released on the eve of the next one. Compliance reports assess a selection of commitments that reflect the overall summit agenda, using publicly available sources. Although scores can sometimes change from the interim report to the final report as G7 members take more action related to their summit promises, the interim scores are often a good indication of a member¹s compliance performance.

In terms of issues, aviation and border security ‹ classified as terrorism ‹ received a high score of 94%. The trade-related issue of internationally recognized environmental standards followed at 88%, and the commitment chosen on the Paris Agreement on climate change received a score of 86%. The commitments on protectionism, migration, women¹s participation in the private sector, support for the African Union¹s Agenda 2063, Ukraine, human trafficking and exploitation, and the fight against online terrorism also scored above the 72% average. The commitments on energy and clean technology, working conditions, inclusive growth, non-proliferation, and food security and nutrition scored between 63% and 69%. The score on mental health fared less well, at 13%.

The full interim report is available for download at www.g7.utoronto.ca/evaluations/2017compliance-interim

The final compliance report will cover the full period from May 28, 2017, until shortly before the 2018 Charlevoix Summit, which will begin on June 8, 2018. It will be released a few days before the summit¹s start.

The G7 Research Group has been monitoring G7 members¹ efforts to comply with the commitments made at their previous summit each year since 1996. These reports are subject to revision as new information becomes available.