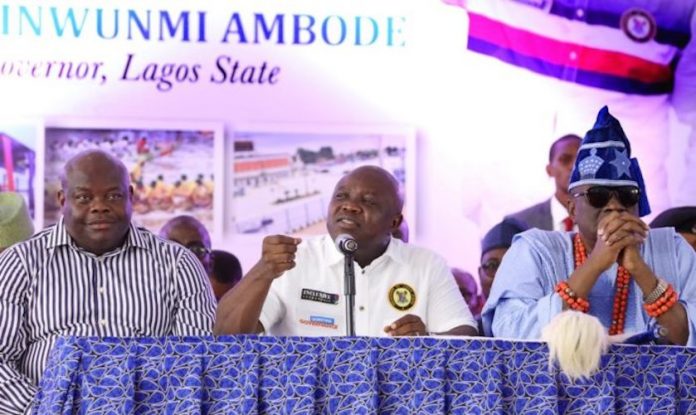 Determined to make the daily traffic logjam in Apapa a thing of the past, the Lagos State Governor, Mr. Akinwunmi Ambode, on Tuesday, said that the State Government would immediately take over the ABAT Truck Terminal Orile-Iganmu and commence immediate repairs on the terminal as part of efforts to permanently address the perennial traffic in Apapa axis majorly caused by breakdown of operations at the ports.

Governor Ambode, who disclosed this at the 2nd Quarter 2018 Town Hall Meeting, the 11th in the Series, held at the Apapa Amusement Park, said he was seriously concerned about the hardship residents in the axis were being subjected to as a result of the activities of containerized trucks and tankers moving in and out of the ports and tank farms, hence the decision to hold the meeting in the area to find lasting solutions.

“I cannot end this address without acknowledging that in Apapa, we have a major challenge; the menace of trucks on our roads and bridges causing endless traffic and loss of business time by Lagosians. This is why we have come here today. To see for ourselves and find a solution.

“Effective today, our government will take over the ABAT Truck Terminal Orile-Iganmu and commence immediate repairs to make the park ready for effective use. In the meantime, we will appeal to the Tanker Drivers Association to conduct themselves in an orderly manner and cooperate with our Task Force to ensure smooth flow of traffic and better access to the Ports.

“We thank the people of Apapa for enduring such harsh conditions but I assure you that this situation will be a thing of the past by the end of this year,” he said.

Governor Ambode said the ABAT Truck Terminal has a capacity to accommodate at least 3000 trucks, adding that the government was already working with security agencies to see how some of the trucks parked on the Western Avenue Bridge would be moved into the park.

“Already, we have cleared the shanties and the way we are trying to run it is such that we will be able to accommodate at least 3,000 trucks in the park. In addition to that, we will work with security agencies and see how we can move the trucks into the park because right now the park can accommodate about 300 trucks but the people are not using it.

“So, if I tell you that one of the areas that I always feel very bad about is this Apapa gridlock and that is the truth and that is why I have decided that lets bring all our resources together; let’s discuss with people; let’s also talk to the experts and see what is happening there,” he said.

The Governor, while responding to complaints from residents on the menace of motorcycle operators popularly called Okada riders, ordered the Police and other security agencies to enforce the State Traffic Law especially with regards to their restriction on major highways and roads so as to bring about sanity in the Apapa axis.

He added that as part of his administration’s efforts to regenerate the axis, Fadaini Road currently in a deplorable state would be fixed while Orile- Mile 2- Trade Fair- CMS Road would also be repaired to open up alternative roads for motorists plying the axis.

Besides, the Governor while alluding to the fact that the 2019 election is fast approaching, said his administration would nonetheless complete all ongoing projects in the State and continue to ensure that residents enjoy the dividends of democracy.

He also urged residents to go all out and collect their Permanent Voters Card (PVC), saying that the State must use the election to confirm its status as the most populous State in Nigeria and thereby help to correct the anomaly in distribution of resources.

“I want to strongly appeal to all Lagosians, this coming election is a different one. We want to define once and for all where the population of Nigeria lies. So it’s not just about APC or about any other party or people that are not interested, we want to use the PVC to send a message that the real population is in Lagos State.

‎”So the duty of all of us ‎is to say that before any census, there is one census, the census of votes and that PVC, so it becomes a finality that the real population is in Lagos State and that is why we must encourage each and every one of us to push ourselves if it is door to door or house to house, in our various groups and unions to ensure that they go out and get our PVC.

“Because each time we make our own State to look good, other people coming in and also put pressure on it for us and that’s why we are having too much pressure on our health facilities, our schools and other facilities that we have arranged, but because we have refused to participate in our civic obligations, the long result is the shortchanging of the resources that is distributed across Nigeria. I want to appeal to all Lagosians and all party leaders that this mobilization for the PVC has a longer reach than what you think,” Governor Ambode said

Assuring that his administration would spare no effort that Lagos remains safe, clean and prosperous, the Governor said that the prosperity of Lagos would automatically translate to greater prosperity for Nigeria.

“Without mincing words, the prosperity of Lagos State is on a positive trajectory. We believe strongly in it, it is our vision and our mission and nobody is going to stop it that if we secure the prosperity of Lagos, we have secured the prosperity of Nigeria. Everything that we need to do to ensure that every Lagosian has something to do is what this government is committed to do. We would use everything within our reach to ensure that Lagos remains safe, clean and prosperous. Continue to fulfill your obligations and we would do more because that’s how Lagos stands to grow,” Governor Ambode said.