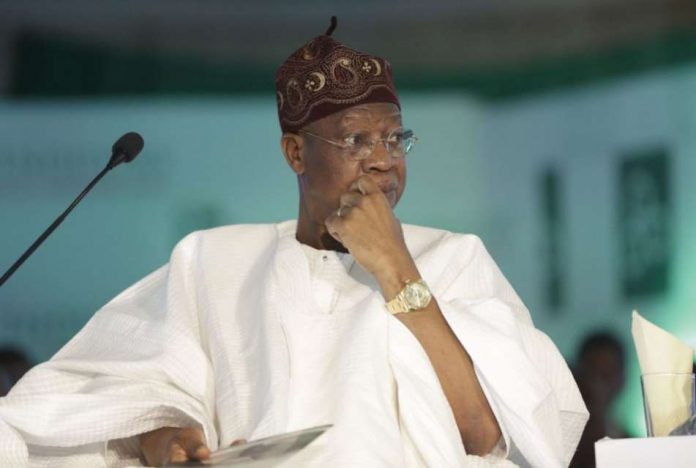 Socio-Economic Rights and Accountability Project (SERAP) has urged the government of President Muhammadu Buhari to “immediately withdraw the clumsy, arbitrary and selective looters’ list, released last week, as the list would seem to serve a political objective or carry out political agenda.”

The organization said: “This kind of action can only diminish the government’s ability to fight corruption, frustrate its oft-expressed goal of a transparent governance, allow suspected perpetrators—whether from the All Progressives Congress (APC) or the Peoples’ Democratic Party (PDP)–to escape justice, and ultimately, deny victims of corruption justice and effective remedies.”

The Minister of Information and Culture, Alhaji Lai Mohammed had on Friday released a list of some of those who have allegedly looted the nation’s treasury. The names in the list revealed were mostly PDP chieftains who are currently being tried for corruption and financial crimes.

Reacting, SERAP in a statement today by its executive director Adetokunbo Mumuni said: “The authorities should withdraw the looters’ list and come up with a comprehensive list as ordered by Justice Hadiza Shagari last year. Allowing the published looters’ list to stand will undermine the credibility of the government’s claim to fight corruption, and signal to Nigerians that it is not serious to satisfactorily address the allegations of grand corruption under the former government of President Goodluck Jonathan and involving those close to this government.”

According to the organization, “If Buhari is truly interested in vindicating the rule of law and the proper administration of justice, his government will do well to genuinely obey Justice Shagari’s judgment ordering the authorities to ‘tell Nigerians the full names of all suspected looters of the public treasury past and present.’ Few things would go farther in fostering and nurturing our system of constitutionalism, democracy, and the rule of law.”

The statement read in part: “This politicized list comes at a time when the government is promoting itself as a beacon of transparency and accountability, and a model for other African countries to follow. The authorities ought to have resisted the temptation to put out this shambolic list and instead obeyed the spirit and the letter of Justice Shagari judgment. What is at stake is not just the rule of law, but also the larger question of whether the government is really serious to fight grand corruption and combat the impunity of perpetrators, regardless of who is involved.”

“The government cannot pick and choose which judgments it wants to obey even though the judgments at times may be highly unsettling. The judgment ought to have been fully obeyed and implemented even if the government would step on toes and make some politicians—whether in APC or PDP–uncomfortable.”

“For the government to impose this list on Nigerians, which would seem to serve as an expedient means to an end that disregard the orders by Justice Shagari is more than a violation of law; it is a breach of trust with the Nigerian people. If disobedience of court orders becomes the norm, the ship of government would become anchorless and adrift in a sea of treacherous uncertainty that could lead to a beachhead on the land of tyranny.”

“If Buhari is to renew his commitment to fight corruption regardless of whether it involves politicians from his own party and the opposition, something more than a propaganda list and hypocritical conduct is needed to restore citizens’ confidence in the ability of his government to deliver on good governance. That something more is a restoration of the rule of law.”

It would be recalled that the Attorney General of the Federation and Minister of Justice Abukabar Malami SAN had last year disclosed President Buhari’s directive to all relevant agencies to compile documents on names of all looters with a view to fully enforcing the judgment of a Federal High Court ordering the government to release to Nigerians information about the names of high ranking public officials from whom public funds were recovered.”

The judgment delivered in July last year by Hon Justice Hadiza Rabiu Shagari following a Freedom of Information suit number: FHC/CS/964/2016 brought by SERAP ordered the government to tell Nigerians the circumstances under which funds were recovered, as well as the exact amount of funds recovered from each public official. Mr Malami made the disclosure during a meeting at his office with a delegation from SERAP in October last year.

It would be recalled that the SERAP suit followed disclosure last year by the Federal Government of funds recovered from some high-ranking public officials and private individuals.

In her judgment delivered on 7th July 2017 Justice Shagari agreed with SERAP that “the Federal Government has legally binding obligations to tell Nigerians the names of all suspected looters of the public treasury past and present.” Joined as Defendants in the suit are the Minister of Information Alhaji Lai Muhammed and the Federal Ministry of Information and Culture. The same day that the judgment was delivered Mr Malami told reporters in Abuja that government was in agreement with the ruling and would carry out the order as long as it does not amount to sub judice.

Justice Shagari also granted the following reliefs: A DECLARATION that by virtue of the provisions of Section 4 (a) of the Freedom of Information Act 2011, the Defendants are under a binding legal obligation to provide the Plaintiff with up to date information relating to the following: 1. To widely disseminate including on a dedicated website information about the names of high ranking public officials from whom public funds were recovered since May 2015. 2. The circumstances under which stolen public funds were returned.

Subsequently, SERAP issued an FOI request and gave the Minister of Information, Alhaji Lai Muhammed 14 days to disclose the names of all suspected looters.

The request reads in part: “While we believe that suspects generally are entitled to be presumed innocent until proven guilty by a court of competent jurisdiction, SERAP opposes blanket non-disclosure of names of high-ranking public officials from whom some of the funds were recovered. SERAP insists that the public interest to know is greater than any other legitimate interest that the government might wish to protect.

“The Nigerian government has an obligation to balance whether the risk of harm to the legitimate aim (that is secrecy of ongoing corruption investigation and presumption of innocence) from disclosure of the names of public officials is greater than the public interest in accessing the information. Publishing the names of those public officials will provide insights relevant to the public debate on the ongoing efforts to prevent and combat a culture of grand corruption in the country.”