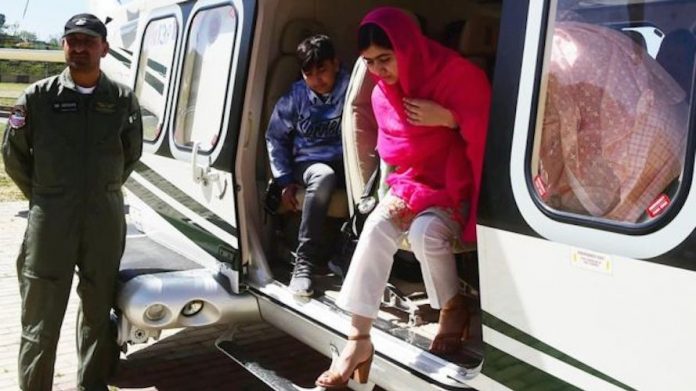 Nobel Peace Prize winner Malala Yousafzai has returned to her hometown in Pakistan for the first time since she was shot there by the Taliban.

Ms Yousafzai, who now lives in the UK, was shot in the head for campaigning for female education in 2012.

Her family’s home region of Swat was once a militant stronghold, and she was attacked on a school bus there at 15.

It had been unclear if the 20 year old would visit the area because of security concerns.

On Thursday, it was announced that Ms Yousafzai had returned to Pakistan for the first time since she was attacked.

“When I gave my first talk… I just could not stop my tears. It is emotional,” she told the BBC. “I’m just so happy to be home and to put my feet on this land again.”

A helicopter carrying Ms Yousafzai landed not far from her family home in Mingora on Saturday, amid a tight security operation.

She was then seen arriving at an all-boys school just outside of the town where she is due to speak later today, AFP news agency report.

Her trip to Pakistan is expected to last four days. Officials from her Malala Fund group are travelling with her, local media report.

Why was she attacked?

Ms Yousafzai was only 11-years-old when she began writing an anonymous diary about life under the Taliban for BBC Urdu that captivated audiences.

She wrote about militant suppression and championed the right to education for girls in Pakistan.

But she was also unafraid to speak publicly about these issues. This drew the attention of the Taliban militants who were active in the region and her family soon began receiving death threats.

“I was concerned about her security,” Pakistani television presenter Hamid Mir told the BBC in 2013.

On the afternoon of 9 October 2015, Ms Yousafzai walked out of school as normal and boarded a small bus waiting outside.

Soon after two militants boarded the bus before one asked: “Who is Malala?” They shot her in the head. Two of her friends were also injured.

The teenager sustained life-threatening injuries, and spent weeks in intensive care before having part of her skull removed to relieve swelling on her brain.

The attack stunned Pakistan – many people did not believe the Taliban would target a child – and catapulted Ms Yousafzai to international fame.

The Pakistani Taliban said they had shot her because she was “promoting Western culture in Pashtun areas”.

What has she done since?

Since her recovery, Ms Yousafzai has continued to speak up for children’s education and rights around the world.

She set up the Malala Fund  with her father Ziauddin, with the goal of “working for a world where every girl can learn and lead without fear”.

In 2014 she became the youngest person to win the Nobel Peace Prize. She and Indian activist Kailash Satyarthi were jointly awarded it for their efforts for children’s rights.

She has continued campaigning while pursuing her studies, and is now reading Politics, Philosophy and Economics at Oxford University.

Ms Yousafzai says she plans to return to Pakistan permanently once she has completed her degree.

How is she viewed in Pakistan?

Ms Yousafzai remains a polarising figure in Pakistan. While the majority of people support her, she is the subject of fierce criticism from those who say she is shaming her country.

She is often targeted with online abuse by conservatives who believe she is following what they see as a Western agenda.

For them, women getting an education is daunting and dangerous, especially in rural areas, where millions of girls drop out of school and end up doing household work, says BBC Urdu editor Haroon Rashid.

A group of private schools in Pakistan declared Friday to be “I Am Not Malala Day”. A spokesman for the schools said they disagreed with her “anti-Islam and anti-Pakistan ideology”.

But this criticism comes as a surprise to Ms Yousafzai.

“I don’t understand. Why do they oppose me? What is the reason behind it?,” she said in an interview with the BBC.

“I do not even look at these comments. Maybe they would hope that I see but I don’t see.”

She added: “The only thing I would say is that I love Pakistan and I am Pakistani and I want a better future for this country.”