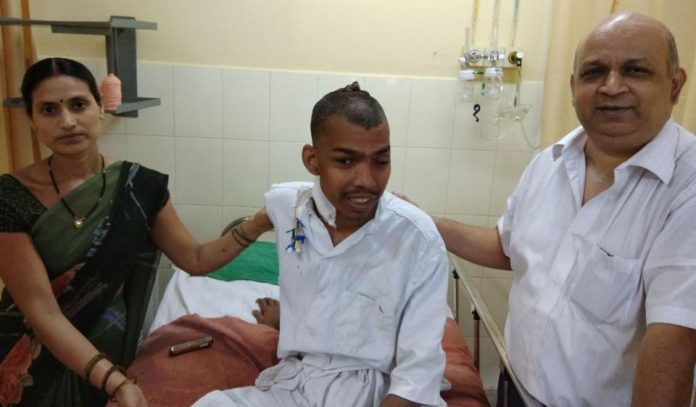 Surgeons in India’s Mumbai city have removed a 1.87-kg brain tumour from a 31-year-old man, saying it to be the largest in the world.

The surgery lasted for seven hours at the Nair Hospital.

News of the procedure was made public recently after the hospital ensured the surgery was successful as the patient, Santlal Pal, had recovered, doctors at the facility told dpa Thursday.

“The tumour was so big, it appeared there was another head mounted on top of the patient’s head,” Srikanth Balasubramaniam, a senior surgeon who was part of the operating team said by phone from Mumbai.

“The surgery was challenging because of the sheer size of the tumour and because there were huge arteries going into the tumour.”

“We checked on records that say the previous record was of removing a 1.4-kg brain tumour, also in Mumbai,” he added.

The tumour had made Pal lose his vision and had also rendered him anaemic.

Doctors said he should gradually regain his sight and health.

Pal, a shopkeeper, had been living with the tumour for three years.

He had been turned away from three hospitals who said the tumour was inoperable.

The surgery was complicated as Pal was anaemic and needed 11 units of blood during the operation.

“Such tumours are rare and pose quite a challenge due to blood loss. Managing the patient requires a lot of planning, team skill and monitoring,” Balasubramaniam said. (dpa/NAN)