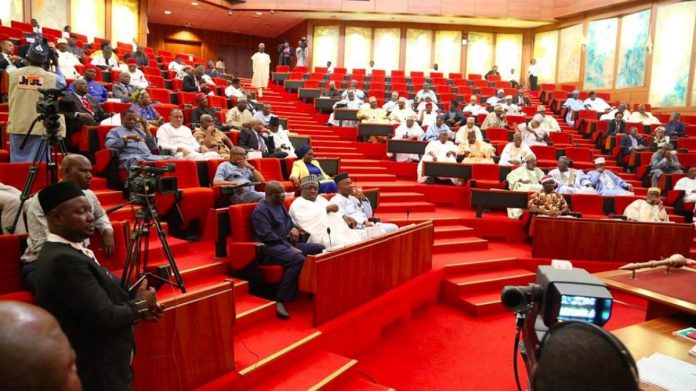 There was pandemonium in the Senate Chamber following conference committee report on amendment to the Independent National Electoral Commission (INEC) act on the reordering of 2019 general elections.

The passage of the report was followed by dissenting voices calling for points of order within the chamber where lawmakers supporting President Muhammadu Buhari alleged that the amendment was targeted at the president.

If the amendment to the electoral act is approved by President Buhari, there would be  a change in the order of election as adopted by the lawmakers.

In the midst of the hue and cry that followed the report, 10 pro-Buhari lawmakers staged a walk-out against the adoption of the report by the Senate and House of Representatives Joint Committee on the Amendment to the Electoral Act.

With the reordering, election into the national assembly would hold first before that of the state lawmakers and state governors, with the presidential election bringing up the rear.

Saraki also ruled against three senators who raised points of order to protest against the adoption.